I absolutely lurveeeee shopping! Especially when its picking out a gift I know someone will love.

This morning, I finally did a checkout on the much coveted (been sitting on my list since its launch) Canon G10 for Jim. It was a toughie choosing between the G10 and the new Panasonic Lumix LX-3 (which was indeed a very improved version and took such magnificent shots) but the husband & I decided to go with the former in the end.

It helped that Amazon.com offered a superb deal on the G10 too! It was the only site which gave us $80 off retail (compared it against 4 other stores). So the savings went into a pretty gift package, card and accessories.
Yay. I feeeeeel accomplished! (and for some reason, tempted to grab myself a Ricoh or Leica..ahh, but that’ll have to wait until the very new Canon lifespan is up). 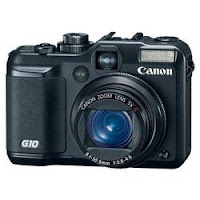