So much have been happening at work & home that it wasn’t till the husband & I realized last night that we’ll be off to Rome/Switzerland/Frankfurt/Paris/London in less than 2 weeks. And considering that our trip was only confirmed few days ago with tonnes of hiccups – everything suddenly seems so overwhelming now that the long awaited honeymoon is finally happening!

Over the weekend, we managed to grab the husband a very nice piece of velvet coat that shouted “Rufus Humphrey!” It’s unlike Bobo to spend on a jacket, especially so for a trip – but the excitement I was squealing as he put on the jacket in the shop (didn’t help that I highlighted how the other dudes started to look for a similar piece after seeing him in that one) decided the fate of the purchase. I loved the jacket so much that I was nearly tempted to get the feminine version in the very same rusty brown but I held out – and thank goodness I did, with a few other things such as cardi,scarfs, gloves, knitted wear – knowing that all these were just going to put a bigger dent on my savings plan. All I really needed to do was to control and hold out a little longer (just 2 more weeks)!

One thing which I really couldn’t hold out however was getting a pair of boots. There was no way I was going to rely on a pair of sneakers for the entire trip – and with part of the itinerary visiting some fine dining places in Paris, Opera, Broadway and the streets of Milan- I wasn’t going to risk being under dressed or told off (as I heard from some), for that matter. And while the husband was supportive of accessorizing my jeans/pants with a pair of knee-high leather boots – mum knew me best: I wasn’t going to survive in any pair of heels higher than 2 inches. She offered to subsidized part of the boots purchase with the condition that I chose the easier-to-handle ankle boots. But even the 2 pairs from Nine West she chose were nowhere near appealing. I’d much rather take the booties option – except that most booties we saw came with heels higher than 3 inches!

Thankfully the husband, being the “favourite” with mom, charmingly rationalize to her how ankle boots was only going to make me look dump-ier and how I needed a pair which was going to elongate those already-short legs. The verdict: I needn’t limit my hunt to ankle-boots only!

Being patient did have its reward. I nearly blew it twice when I tried on a pair of cowboys from Zara – which was probably the nicest out of the 15 pairs we’ve tried on thus far except that I wasn’t convinced enough to make the purchase despite the very attractive price tag; along with a black pair of leather boots which resembled too much of the fish monger’s. Thanks for mom’s insistence that we should probably shop around more – I finally found my perfect fit a few shops away. And comfy yet stylish it fitted the bill. 🙂 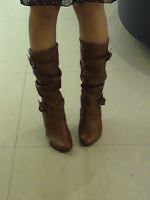 I must admit that I was quite tempted to hunt for another: a structured black pair though – but think I’d wait out till London to do so.

With some woolly socks and hats left to purchase in the next week, we should all set to jet off and enjoy the honeymoon.