I hadn’t experience this in a long while, but today was probably the worst day in the week (I dare make that assumption though its officially 3 days to a new week) and definitely the worst I’ve had since I started on the new job.
Work didn’t start off well albeit little positive notes streaming in intermittently, still overpowered by the nasty deadlines, tight turnarounds and strangely unreasonable requests.

The husband called later in the noon to say that he was going home to rest first because he had to work through the night later on & he was still feeling ill – only to discover that he had left his house keys on the dining table – and there wasn’t anyone at home. So he didn’t get to rest at all.

I couldn’t spare the time to properly converse with the husband twice, while he was trying to while away his time before his ‘night shift’ and was equally irritated when I eventually realize that I didn’t have my set of house keys and my ezlink card with me too. We were stranded, husband & wife without housekeys and mum (in-law) was away in Bintan with most of the family. I quickly made some plans to spend the evening at the hair salon getting a treatment and trim, something I’ve been meaning to do, but ended up leaving the office later than expected because of the endless list of things to do, the last task streaming in at 6pm. Whatever happened to life after work for these people ?!?!?!

And because the only person who had the keys to the house was my sis-in-law, Nicole, who had plans to leave home at 9pm (while the husband was busy working at the client’s); I made a mad dash from the office only to find food stalls in the vicinity all closed, tummy rumbling with hunger and a terribly long taxi queue. I scrambled for the last of whatever coins in the wallet to buy an ezlink card, headed to Raffles City before receiving a call from the husband to inform that he was on his way home because his health wasn’t any good to keep him going through the night. Big Phew!

And knowing that he could reach home in time, I took a tiny breather and did some retail therapy at Watsons, blowing $110 in 15 minutes (can you believe that happening at Watsons??), before grabbing some bread for tomorrow’s breakfast and getting a foot long worth of Subway for dinner.

The taxi queue was horrendously long – 30 minutes heavily relying on a pair of 3 inch stilettos . I was growing impatient. A taxi eventually arrived and I got home feeling incredibly hungry, irritated, tired..

It was then, I saw a big grey box greeting me from the couch. I couldn’t quite figure out if it was a present or another box of freebies which the husband won from somewhere until I saw the little card hanging out of it saying “Sweetie – the sunshine of my life – love bobo”

Another (my 2nd) Xmas pressie had arrived early (the first being a new digi cam from mum) and boy – was it a pleasant surprise to see that it was the Mulberry’s Baywater (a classic I’ve been eyeing for a long long while) in a black (always been looking for a good black bag). For all that talk about not wanting to get me another bag and refusing to let me spend on another; the husband actually bought me another covet item in my wish list.

It really made my evening and chased away every frown I was wearing.
Looks like there’s a Santa Claus in Mr. Murphy after all.
Hooray! 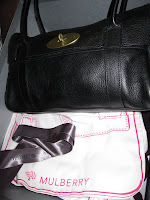 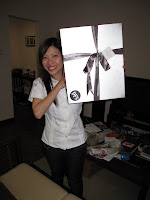 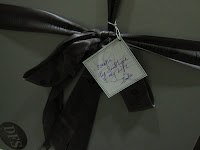 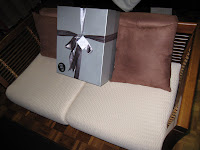