What intended to be a birthday hi-tea celebration at Sheraton organized by my mummy for mum-in-law’s birthday today turned out to be something totally unexpected… It shocked the world out of us, and also led us to realize that perhaps there was something else to be enlighted about…

The 4 of us (the husband, myself, and the 2 moms) were on the way to Sheraton Hotel this afternoon. The husband had meant to use the Central Expressway (CTE) to get there, the route he would usually take to get to town. But because it had rained heavily just 20 minutes before, with the road still fairly wet, with so many people in the car (which meant that he would have to stop earlier than usual) and a long line piling up, we ended up missing the route.

Which led us to take the next alternative route from Bartley Rd, which was to go by Upp. Thomson then up to Novena and then Newton. Somehow, the husband slipped on the new highway which links directly to Lornie instead and couldn’t find an exit out to the route we were supposed to take. So this eventually forced us to take the last alternate route – which was to go by PIE, exit Stevens Rd.

So we did…until upon entering, we realized it was a massive jam. But because our exit was just the next one, plus we had already entered the expressway (and there was no turning back), we just went along with it. We kept to the extreme left, as we were exiting really soon, driving at a turtle pace due to the massie jam.
We were at a complete standstill. And suddenly, just moments later, our car received a gushing impact from the back. BAM!

I was a little shaken, and wanted to ask what that was about until the car received a 2nd impact before I could even think straight. BAMBAM! And before I knew it, I looked at the husband, he blinked his eyes and said FUCK! Still, I was in a total shock, not knowing what happened.

I opened the car door, and saw 5 other cars piled up behind me. It was a 8 car chain collision, with a big blue sand truck being the cause of it. But we were the only car to receive a double impact because the lady behind us steered her car to the extreme right which ran up our rear on the right. And the car behind her got pushed and ram our rear on the left. I was in disbelief at the situation we were in.

I looked at the other drivers, and smiled out of disbelief (the others acknowledging the disbelief too). And everyone started asking “what to do”. Suddenly I blurted out: “its the truck’s fault!”, and the next thing I knew, the driver (of the truck I assumed) walked past me to check all the cars he smashed and said “yes, sorry, its my fault.” I felt really bad at the statement I made because I knew he didn’t mean for this to happen as well as his work could be at stake.

But at the same time, I also felt angry because if not for the deep boot of the car, both my mum and mum-in-law sitting at the back would have got seriously injured. Praise the Lord that they were perfectly alright. The husband & I suffered some whiplash and sprained our necks. But I was too occupied taking down each driver’s car model and particulars, while the husband was taking photos of all the cars from all angles. The lady behind us was at a complete loss too. All she kept uttering to me was “what should I do?” and asked if she could just contact me to get the details of all the drivers instead. I assumed she rarely drives, hence the action to swerve her car to spill to the next lane (which could have killed her!) and the panick.

Within the next 30 minutes, there were passerbys who offered to drive any of us to get any medical attention, along with some car workshop folks, who were offering their tow services. I was still at a loss and all I could manage was to try to calm down, ensuring that I copied down the details of everyone and assist the husband as much I could.

The next hour was spent shuttling to and fro the car workshop and the authorized AIG workshop to make our 3rd party claims. The husband & I were really exhausted at this point. I felt bad that the mothers were dragged in this as well. This was also when I started to feel my neck and upper back straining and hurting more.

The accident took place at 12.45pm. And by 3.45pm, we managed to complete all the necessary paperwork and were given a courtesy car to drive for the time being. The husband & I went for coffee later on to relax and reflect back on the incident. We agreed that it was probably ‘meant to be’, because one way or another, he was ‘forced’ to miss 2 alternate routes which we intended to take…which led us to be involved in this 8 car chain collision. It also happened that the husband had just removed 2 of his 25kg (each) servers in the boot which could have caused a greater impact on us should it have been in the car then.

We were definitely very blessed that none of us sustained major injuries (I later found out that my mum-in-law had also said a prayer in the car then thanking the Lord that there were no fatalities or serious injuries).

Lesson learnt: buying a car with a deep boot does help (it helped to absorb 80% of the impact). AND even if you do your part to drive properly, you can’t guarantee that others will too.
Sigh. Indeed the start of the weekend was unexpectedly ‘eventful’. 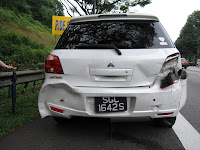 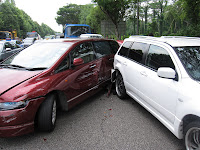 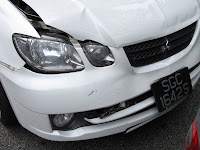 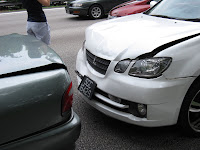